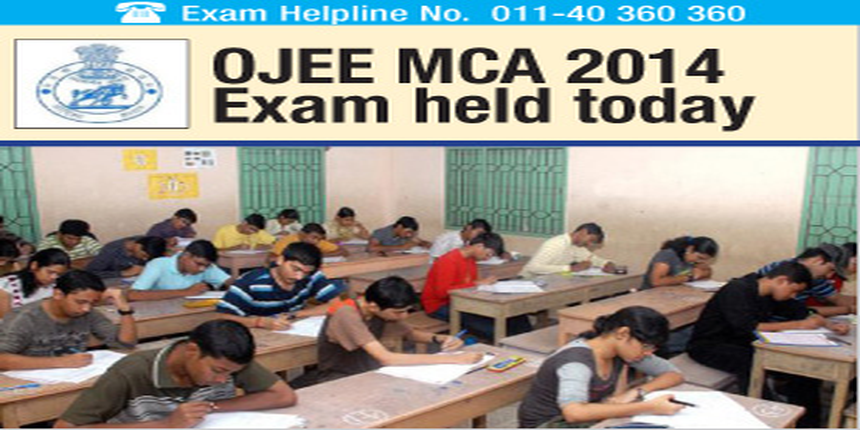 Odisha JEE MCA 2014 concludes on May 11, 2014. State level Odisha Joint Entrance Exam was conducted by the Government of Odisha State in offline mode across all test centers located in Odisha.

According to media reports, nearly 40,000 candidates have appeared for the written exam. OJEE MCA 2014 is conducted to offer admissions for full time Master of Computer Applications course for the current academic year.

Candidates appeared for the exam at their respective test centers and their preferred course and its applicable time slot.

According to OJEE MCA 2014 paper pattern, negative marking scheme is not applicable. Candidates were given total time duration of 120 minutes to take the exam. The question paper carried 120 Multiple Choice Questions (MCQs) from Mathematics and Computer Awareness subjects. OJEE MCA 2014 sections and number of questions to be covered in each section is given below.

OJEE MCA 2014 result will be tentatively declared in first week of July.  Depending on the performance of candidates in the written examination a merit list will be prepared by the exam conducting authority Government of Odisha State. Selection process will also depend on the OJEE MCA 2014 cutoff list.

i m resident of gujrat n my native is in odisha..am i eligible for btech and b.pharm admission in ojee??

Yes you are eligible for OJEE as your native is Odisa. Your parent domicile will also be accepted in OJEE.

I hope you have got your answer.

As per the new draft of Right of Persons with Disability, 2014 the certificate issued by the state authorities are valid all over the country. Since district offices also comes under the state so your certificate is valid. For more information you can refer this news article: https://timesofindia.indiatimes.com/india/Disability-certificates-to-be-valid-across-the-country/articleshow/52308206.cms

I am unable to find the OJEE form kindly share the link if you can..thank you

Will I be eligible for ojee counselling 2020 for admission in btech as I belong to bihar? It is based on jee main or exam conducted by ojee separately?

Yes you are eligible.The admission of students in several engineering college in Orissa is done through OJEE.Admission is through online counseling on the basis of JEE Main rank.In case of vacant seat it conducts a separate exam in the month of May/June for the student not having JEE main score.
Click the link below for eligibility criteria details

Your OJEE brochure has been successfully mailed to your registered email id .