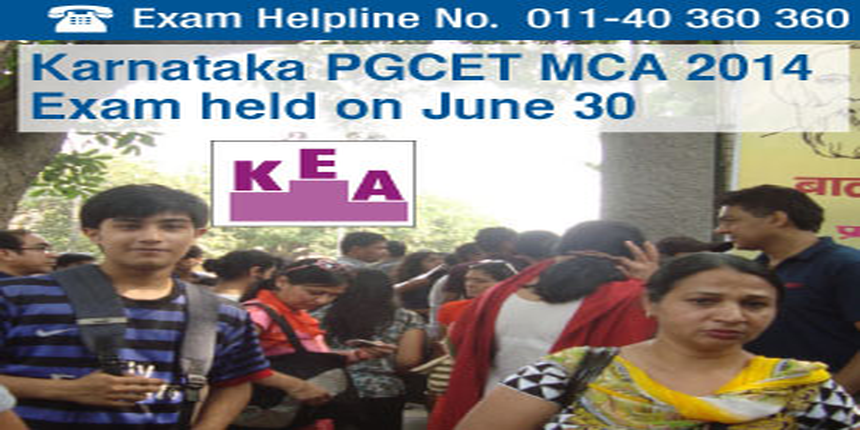 State level Karnataka PGCET MCA 2014 examination was conducted successfully on June 30, 2014 across all 11 test centers located in Karnataka state. Talking to Careers360, an exam official told that paper-pencil based exam was conducted in fair manner on and invigilators were alert to cross check the information mentioned in the admit card.

According to media reports, nearly 5,331 candidates have registered for the written examination to seek admission for full time Masters of Computer Application courses at University Departments, University Post Graduate Centers, Government aided and private institutes located within the State.

As per the scheduled plan, the exam timing was from 3:00 am to 5:00 pm. Karnataka PGCET MCA 2014 paper pattern comprised of 80 objective type questions and the paper was divided into two sections- Part A, contained will contain 60 questions of one mark each and Part B will contain 20 questions of two marks each. Negative marking scheme is not applicable.

Karnataka PGCET MCA 2014 Paper Pattern will contain 80 multiple choice questions, which have to b...

what is the syllabus for Karnataka PGCET mechanical engineering


Karnataka PGCET syllabus for mechanical science consists of the following;

i have a cgpa of 5.6 in engg (vtu). will i be eligible to take up pgcet through the general merit category?

see karnataka pgcet exam is for admission in mba, mca or m.e /m.tech courses. the eligibility criteria for all course is you need to have 50% marks in your graduation course in relevant discipline. now you need to convert you cgpa to percentage using the conversion rules of your university and apply for  pgcet.

hope you may understand.

For score above 70 in Karnataka pgcet mba, what can be the possible ranking? I am 28 years old.

Hope you’re having a great day.

I would like to inform you that if you have scored above 70, probably your rank will depend on the percentile of  students securing top ranks. In accordance with the recent trends, your expected rank in Karnataka PGCET will be around 1126-2500.

Let me know if you have further clarifications by mentioning it in the comment section below.

Have a nice day!

I wish that you have a bright future ahead.

when is the nxt pgcet xam is on ?? which is the best book to refer...

Karnataka PGCET registration will be started on May 19, 2020. Exam will be on 20-21 July 2020.
Best books for PGCET is as follows-
RS Agarwal, Arihant Publication for reasoning, Word power made easy for verbal ability, Arun Sharma and sarvesh Kumar for quantitative aptitude. Study newspapers like Times of India, Economic times
thoroughly for current affairs.
Read More
Answer
Answer Later
Report

Your Karnataka PGCET brochure has been successfully mailed to your registered email id .