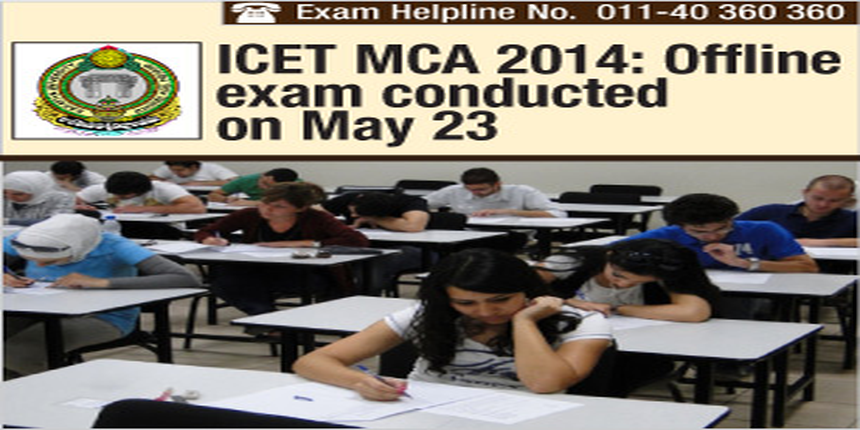 ICET MCA 2014 written examination was held on May 23, 2014. The entrance examination was conducted smoothly byKakatiya University at all test centers across Andhra Pradesh.

According to exam officials around 1.4 lakh candidates (including both MBA and MCA courses) have registered for the ICET 2014 exam. Candidates appeared for the exam at 262 centers across the Seemandhra and Telangana regions.

Talking careers360, a test taker Alekye Reddy, who took the exam at Sarojini Naidu Vanita Maha Vidyalaya located in Hyderabad, told that the question paper in terms of difficulty level was average. She found the question from “Mathematical Ability” section very tough and struggled with time management as the paper was lengthy.

Further she added that “Analytical Ability” section was the easiest for her and attempted all questions based on coding and decoding.

Rekha Goud, another test taker who appeared for the exam from Hyderabad shared a similar response regarding the time management for the exam. She told that as the solving the paper was a time consuming process as the questions were tricky in nature and short cut to derive answer was not applicable for majority of questions.

“I was able to attempt 80-85% of question paper. Rest of the portion was left due to time constraint”, the test taker told.

ICET MCA 2014 exam is conducted to offer admission to qualifying candidates for full time/part-time/evening/distance MCA course at universities and their affiliated colleges located in Andhra Pradesh.

Negative mark is not applicable. Each question carries one mark. ICET MCA 2014 official Answer Key is scheduled to be released on May 26. Result of ICET MCA 2014 will be declared on June 9, 2014.

Admission to qualifying candidates will be done through from ICET MCA 2014 Counselling, specific dates for the same are yet to be notified by the exam conducting authority.

Stay tuned to it.careers360.com for more news and articles on ICET MCA 2014 Exam

Syllabus is provided below :-


For detailedinformation about AP icet syllabus go through our page for which link is provided below :-

APICET exam can give the 2020 engineer graduates

For APICET 2019 Exam, candidates who have completed their graduation fulfilling the eligibility in terms of aggregate and all, as well as those in the final years were eligible to apply for this exams. Following this norm, the same rule should be applied in 2020 unless specified otherwise by authorities.

Candidates in the final year of their graduation or are appearing for the final exams are also eligible for APICET. There's no age bar.

is there any third counselling for ap icet 2019?

AP ICET 2019 final phase counseling has been concluded. The date for certificate verification and exercising options was 29th and 30th august, 2019.

Do let us know if you have any other queries.

Hello aspirant, since there is no new notification regarding 3rd or any other round of counselling so I would suggest you to remain in touch with the official as well as careers360 website.

There is no new notifications regarding third or second round counselling but you must remain in touch with the college official website and careers360 website.

Your APICET brochure has been successfully mailed to your registered email id .