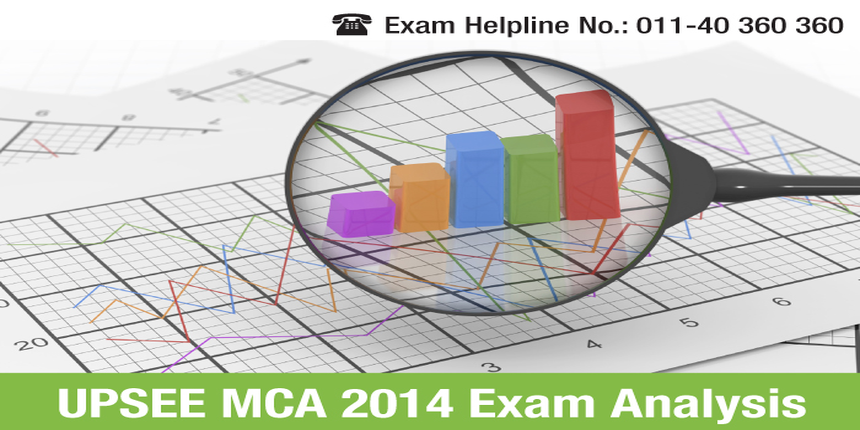 Careers360 brings you an overall look at the UPSEE MCA 2014 online examination. The article covers information the total number of registration for the academic year, test takers views on the difficulty levels of the exam and different sections of the question paper. Besides, special precautions taken by the exam conducting authority to curb impersonation activities are also included. Read below the UPSEE MCA 2014 Exam Analysis, which is based on experiences shared by test takers.

Each candidate was photographed and his/her bio metric data such as signature and thumb impression was taken at the examination center.  Candidates were allowed to enter examination hall after the completion of the above said formalities.

Nearly 500 candidates, reported to Nodal Centre in the City of Examination for issuance of duplicate admit card. As their photograph/signature printed on their admit card was found blurred.

All such candidates were required to bring a copy of downloaded admit card along with a copy of confirmation page, Six copies of their recent color photographs and at least one photo identity proof such as Aadhar Card, Driving License, School Identity Card, Voter ID Card etc.

Ritika Garg: a test taker who appeared for the exam from Meerut was satisfied with her performance. She rated Mathematics the toughest section. She said, “Solving questions covered in statistic section was less consuming as the same were comparatively easier than mathematical questions.”

Ritesh Singh: a test taker from Gorakhpur shared similar response. For him also Mathematics was the toughest section. However he told that nearly 40-45 questions were attempted by him for which he managed time quite easily.

The exam conducting authority UPTU will be release UPSEE MCA answer key along with result declaration, which will be declared on or before May 20, 2014. Qualifying candidates, depending on their score/merit will be offered admissions for MCA course by one or more of the UPSEE MCA Participating Institutes located in Uttar Pradesh state.

I got GN 466 rank in upsee mca(lateral entry) . Can i get govt. aided college for mca.

Hello aspirant,based on the rank you mentioned you might be able to get admission into government aided college for mca.Hope thus helps.

Sir please help me i got OBC-211 AND GENERAL-661 IN UPSEE(MCA) EXAM .. WHICH COLLEGE IS GIVEN TO ME ON THIS RANK

Firstly I congratulate you on securing the rank of 661 General ranks in UPSEE 2019 and now to answer your question, there are several colleges that you can consider for admission.

Please use the following link to see the list of colleges that you can consider for admission:

Entrance exam for admission to various Kanpur University Courses is usually conducted in the month of May every year. Application form can be filled online on payment of INR 600 (INR 400 for reserved categories) by Credit/ Debit Card or Net-Banking or through Challan.

Sir i got general rank 304 in upsee mca exam n general girl rank 101 can i get any govt college ....like iet lucknow or knit or Raebareli?

Yes you can get an admission.

to get the whole list please visit the google drive link:- https://drive.google.com/file/d/11Lsz0AnntbzMM6FoV2lAiRxKzrlvVi80/view

as the above specified cutoff you can get an admission in KNIT or KGIET for sure.

to know more list of colleges where you can take an admission you can use the UPSEE college predictor:- https://engineering.careers360.com/articles/upsee-cutoff

View All Questions
Have a question related to M.C.A. ?

Your UPSEE brochure has been successfully mailed to your registered email id .