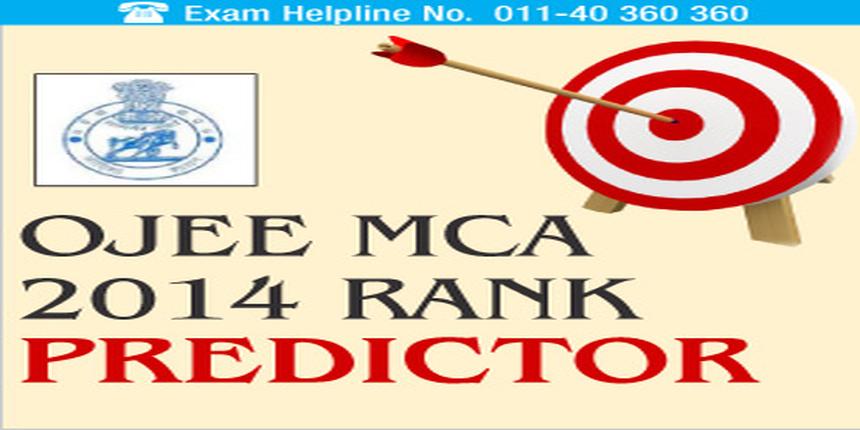 OJEE MCA 2014 Rank Predictor is an internet supported tool by Careers360 for the purpose of helping 2014 test takers of Odisha JEE 2014 to know their probable rank as well as percentile of marks.

Odisha Joint Entrance Exam 2014 was conducted by Government of Odisha State on May 11, 2014 across all test centers located in Odisha state.

Result of OJEE MCA will be tentatively declared in first week of July. Using the OJEE MCA 2014 Rank Predictor before the result declaration will help test takers to know their probable score and through the received information on estimated OJEE MCA 2014 rank, candidates can plan which institute to prefer during the OJEE MCA 2014 counselling process.

In previous years, Odisha JEE MCA seat allotment/selection process was dependent on OJEE MCA cutoff. Check below the Institution and category (General, SC, and ST) wise OJEE MCA cutoff mark/marks for the year 2012 for some of top Government Colleges/Institutes -

OJEE MCA 2014 Exam– The exam was conducted on May 11 by the Government of Odisha State to offer a...

As per the new draft of Right of Persons with Disability, 2014 the certificate issued by the state authorities are valid all over the country. Since district offices also comes under the state so your certificate is valid. For more information you can refer this news article: https://timesofindia.indiatimes.com/india/Disability-certificates-to-be-valid-across-the-country/articleshow/52308206.cms

I am unable to find the OJEE form kindly share the link if you can..thank you

Will I be eligible for ojee counselling 2020 for admission in btech as I belong to bihar? It is based on jee main or exam conducted by ojee separately?

Yes you are eligible.The admission of students in several engineering college in Orissa is done through OJEE.Admission is through online counseling on the basis of JEE Main rank.In case of vacant seat it conducts a separate exam in the month of May/June for the student not having JEE main score.
Click the link below for eligibility criteria details

eligibility for applying for btech and bpharm n bsc course?? is it compulsory to pass out in odisha schools??

You should provide complete details in your question. Not only it assist us in answering the questions but also increase the readability. From the tags I got to know that you are asking about OJEE. The eligibility criteria for admission in undergradaute courses through is that candidate must've completed 10+2 from a recognised board.

To apply to B.Pharma, candidate must've completed 10+2 from recognized board in science stream with minimum aggregate of 45%

How many marks are required for getting into scb medical college through state quota general in neet 2020?

To get into SCB medical college, Cuttack the previous year's cut off for 2019 was as following

Your OJEE brochure has been successfully mailed to your registered email id .