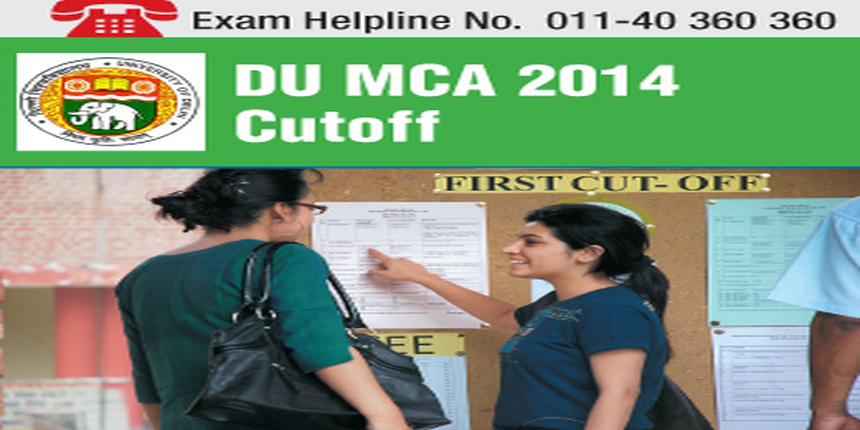 DU MCA 2014 Cutoff percentage of marks will be based on various factors such as availability of seats, number of applicants, and difficulty of the entrance examination. The exam conducting body University of Delhi will govern the process of DU MCA 2014 Cutoff list preparation.

Careers360 will update the article once the DU MCA 2014 cutoff is declared by the University. To know the latest information about the DU MCA 2014 Cutoff, keep visiting this page regularly.

Admission for three years Master of Computer Application course will be offered to qualifying candidates as per their marks scored in the DU MCA 2014 entrance examination. For seat allotment process, Delhi University will prepare separate merit lists for candidates with reserved and unreserved background. The final DU MCA 2014 merit list, 85% weightage will be given to the score in the Entrance test and 15% weightage will be given to the score of the interview.

Candidates from unreserved category will be offered in accordance with DU MCA 2014 general merit list devised by the university. The merit list will arranged in order of merit of candidates in which SC/ST/OBC candidates will also be included.

There are total of 46 MCA seats at Department of Computer Science, University of Delhi for the current academic year. Seat break for MCA course is given below-

The exam conducting authority has not notified on release date DU MCA 2014 cutoff list. Further, whether the list containing cutoff percentage of marks will be accessible to candidates or not is also not mentioned. However, two admission lists will be announced after the DU MCA 2014 result declaration. The first and second DU MCA admission list will be released on July 14, 2014 and July 17, 2014 respectively.

Stay tuned to it.careers360.com for more news and articles on DU MCA 2014 Cutoff

DU MCA Cutoff 2020 - University of Delhi releases the DU MCA 2020 Cutoff in online mode through a...

i am completed b.sc math. can i apply for mca

Yes You can Apply!

Here is the M.C.A. Eligibility.

Any graduate who has passed or appearing for the final year degree examination in any discipline (Science, Commerce, Arts, Engineering or any approved University) is eligible to apply. Candidates must have mathematics as a subject in their 10+2 course or any one year of graduation.

So Surely you can apply for It !

Best of Luck for your Future!

i am from commerce background and i have done bba so can i also apply for mca?

the basic eligibility for mca course is students need to have bachelors degree in any discipline, like arts, science or commerce, but must have studies mathematics as a subject in 10+2 course.

now for nits, which is the mst prestigious institute in india, eligibility criteria is slightly different, you need to have graduation in bsc or be/btech or bit and must have studies mathematics or statistics as a subject in graduation course.

hope it would help.

How we get Direct admission for MCA in DU

Dear Lalit, admission to MCA in DU is based on an Entrance Examination and Interview. The final merit list is prepared 85% weightage is given to the Entrance exam and 15% to the Interview. This entrance examination will have 50 Objevtive questions for a duration of 2 hours. Questions will be asked in English, Mathematics, Computer Science and Logic Ability. There is no provision of direct admission in DU for MCA. For more information, please visit their official page at: http://cs.du.ac.in/admission/mca/

What would be the best study pattern to clear DU MCA Entrance Exam while studying at home with the help of book?

Make a proper Schedule of studies

It is very important that you make a schedule of studies and stick to it and you will have an exact idea of what you are required to study and the time required for it.

It is essential that you have a clear idea of the concepts and formulae rather than rote learning of things for the papers. While you might require it for memorizing formulas it is important that for other stuff you make sure you clear your basics and concepts before moving on.

Even though there may be a complete change in the exam pattern or the expected questions altogether, it is important that you practice on the sample and previous years question papers available for the engineering exam you’d be attempting. You will know the existing pattern and have a fair idea of the type of questions to expect in the paper along with the time constraint.

The paper pattern, duration of the paper and the number of questions to be attempted in the given amount of time is not something you will be able to pick up on the day of the examination. A Mock Test tests a student’s abilities as it not only provides a similar feel of real exams but also helps in building speed and confident to face the exam. Furthermore, they can improve their performance to get an extra edge in actual exams.

Is sufficient and covers everything.

Start from the very Basic to make your base strong,Learn each type of problems and their techniques of solving, work on Quantitative aptitude and practice the previous years papers.

Your DU MCA Entrance Exam brochure has been successfully mailed to your registered email id .