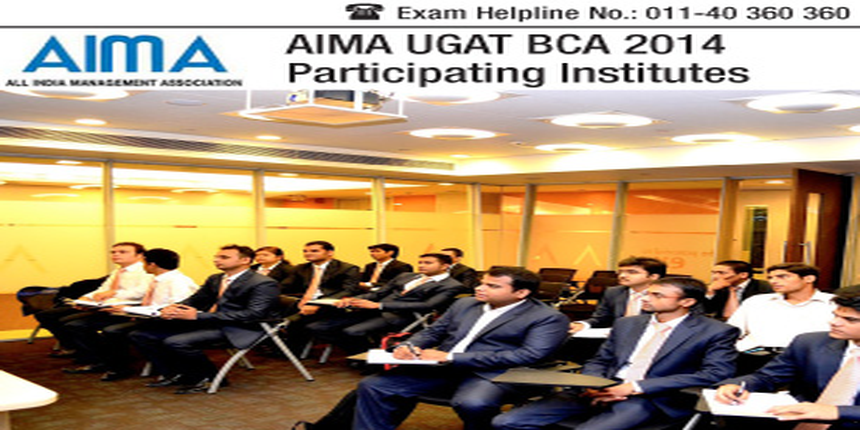 AIMA UGA BCA 2014 Participating Institutes represents names of all colleges and institutes, who will accept AIMA UGA BCA 2014 score to offer admission for Bachelor of Computer Application course for the academic year 2014.

AIMA Undergraduate Aptitude Test BCA is scheduled to be held on May 10, 2014. The All India Management Association will conduct the examination in both online as well offline mode.

Candidates have to mention their preferred mode of exam format (either paper-based test or computer-based test) and test city/center on the application form. Result date of AIMA UGA BCA 2014 is yet to be notified by the exam conducting authority.

Qualifying candidates of AIMA UGA BCA 2014, depending on their merit/score gained in the exam and institutes preferred by them, will be offered admission for Bachelor of Hotel Management course. It is to be noted that candidates will be offered admission by five institutes/colleges/universities preferred by them as per AIMA UGAT BCA 2014 Cutoff and number of seats available of the preferred institute.

Showing 6 out of 6 Questions
92 Views

If the exam The GGSIPU CET BBA 2019 exam is conducted afternoon ,(it will be mentioned in the admit card )

Which is the best book for UGAT exam?

Here are some books which are generally recommended for UGAT examination :

1. Quantitative Aptitude by R.S.Agrawal and by Arun Sharma

Hope you get this.

Can you suggest combined book for preparation of AIMA Ugat exam according to exam pattern??

There are a number of good books you can use while you are preparing for your Aima ugat exam and are planning to excel in it . There are a number of books by Arihant publications which can be used by students for all BBA/bms/bmm examinations throughout india .they have really good study material in it and are extremely helpful to students.

Can you suggest some best books for preparation of AIMA UGAT exam ??

Here are some of the best books according to the exam pattern. The pattern for AIMA UGAT exam is as follows-

Reference Books for different sections are as follows:

For Numerical and Data Analysis:

For Reasoning and Intelligence:

Hope it helped you

View All Questions
Have a question related to B.B.A ?
Under Graduate Aptitude Test (UGAT)
Get Updates Applications Open

Your UGAT brochure has been successfully mailed to your registered email id .